If you are interested in the work "Stan Laurel" please fill out the form below.

Thank you! Your message has been sent.
"Stan Laurel" 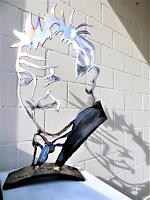 Stan Laurel and Ollie Hardy were an American comedian duo that consisted of Stan Laurel and Oliver Hardy. 1921 and 1926-1951 they made together 106 films (79 short films, 27 feature films), with guest appearances included. They are considered one of the most famous and successful film duos of all time. In German-speaking Laurel and Hardy are also known under the names of Laurel and Hardy Stan & Ollie or.
Stan Laurel as the creative head of the duo. He developed not only numerous gags and screenplays, but led for most of her films de facto director and worked at the intersection, even if it does in the opening credits experienced no mention by name.
Sculpture Metal
Stan Laurel

Sculpture: Depending on the light influence the colors reflect on the metal sculpture
63cm h / 3.5kg