If you are interested in the work "Bob Marley" please fill out the form below.

Thank you! Your message has been sent.
"Bob Marley" 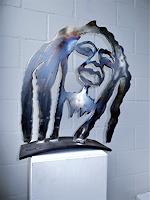 Bob Marley among his best known songs include Buffalo Soldier, Get Up, Stand Up, I Shot the Sheriff, No Woman No Cry, Could You Be Loved?, And Redemption Song Stir It Up. In addition to his musical work Marley spread the message of the Rastafari movement. Was for their trailers and to many people in the Third World and is Marley an important role model. Bob Marley was a Jamaican singer, guitarist and songwriter. Marley was a co-founder and one of the most important exponents of reggae, who became known internationally through him and his band The Wailers from the mid-1970s

Sculpture: Depending on the light influence the colors reflect on the metal sculpture
52cm h / 6kg