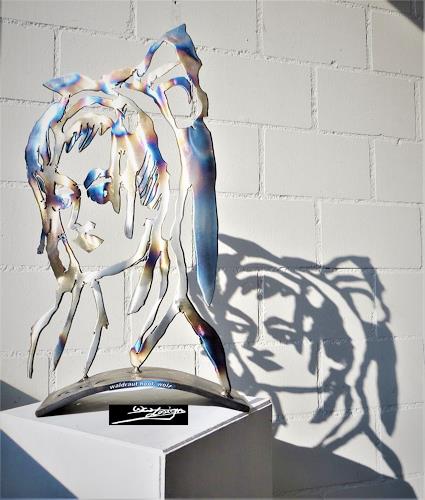 Boy George is a British singer, songwriter and house DJ. Worldwide became famous for Boy George in the early 1980s as a singer in the band Culture Club. Culture Club was a British pop band, who had their greatest success in the 1980s. The band did not only with their music, but also with the high-pitched, stressed female clothing style of their frontman Boy George stir.

Sculpture: Depending on the light influence the colors reflect on the metal sculpture
51cm h / 3kg

Availability:
For sale
Size:
20.1 x 10.2 inch
Technique:
Sculpture
Medium:
Metal
Category:
Sculpture
Comments
The 21st Century Art Book The Twenty First Century, Italy
Now, it’s time to do something for all those realwald artists who didn’t still receive what they deserve. From here idea to give life to international catalog that could contain all those beautiful artistic realities that really have something, to communicate and they do it through experimentation, survey and research. Those abstract, informal, figurative and conceptual realities that we had the honor and the luck to deal with, during our professional path. A dangerous path, if you walk it alone, because full of dangers. In years, we are in search of new valid realities that could go down on history. For the presentation of the volume, we have chose Verona, because we think is the right place to affirm a new artistic ideology. In Italy, as abroad, new artistic movements rise,but they really don’t change anything. Now, we are sure that everyone can be an artist, and if wethink it, we are terribly wrong. Art is not for the “illiterate of the sign”, those”artists”who are not able to give us a proof of their questions or joys. In this catalog, “. The XXI century Art Book” in answer to all these questions, the artists who through their art confess their moods, emotions, anxieties, beauties, dreams, grudges, find their place.
.”May 2016, Text:Salvatore Russo & Francesco Saverio Russo”
by waldraut hool-wolf