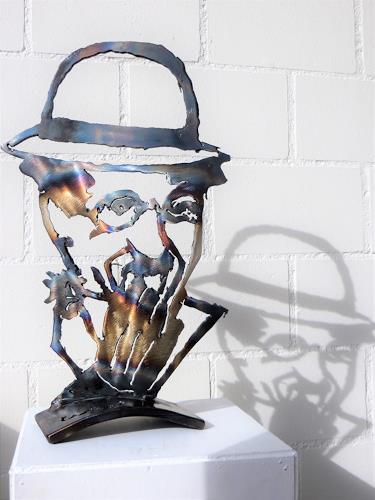 Sir Charles Spencer Chaplin, Jr. KBE, known as Charlie Chaplin (* April 16, 1889 probably in London, [1] † December 25, 1977 in Vevey, Switzerland),
was a British comedian, actor, Editor, director, composer, screenwriter and film producer.
Chaplin is one of the most influential comedians of the 20th century. His most famous role is the "tramp" (originally "The Tramp", in French as "Charlot"), an impoverished migrant workers with the manners and dignity of a gentleman. This figure with two finger mustache (also called "Chaplinbart"), and oversized trousers and shoes, tight jacket, bamboo stick in his hand and bowler hat became a film icon
Charlie Chaplin

Sculpture: Depending on the light influence the colors reflect on the metal sculpture
41cm h / 2Kg